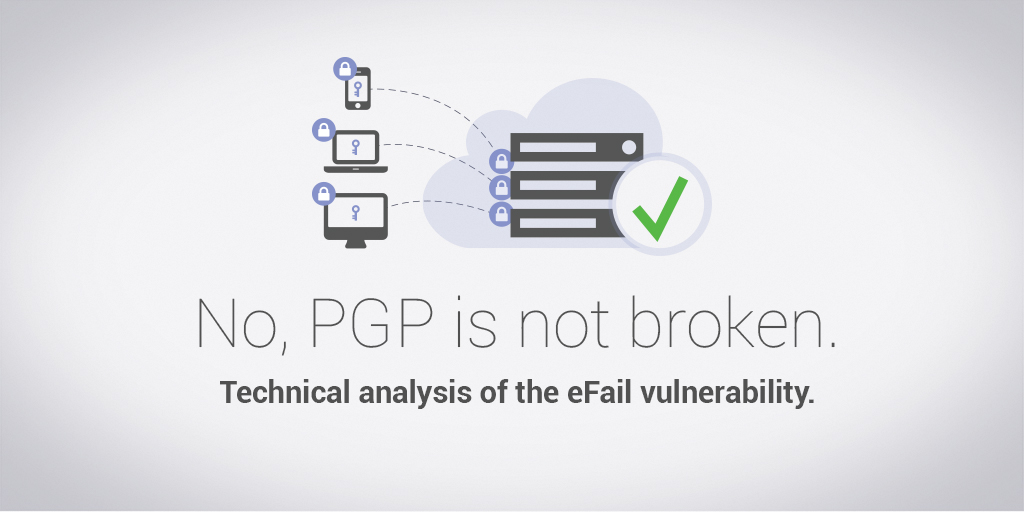 Yesterday there was a security flap over possible PGP bugs. There's some legitimate concern behind it, but the biggest feature of this disclosure was that the way that it was communicated was really poor and alarmist. There have been a series of high profile software bugs over the last five years and the trend seems to be to always create a bigger razzle than the previous one.

As far as I can ascertain the security implications for the Freedombone system are zero, even though GPG is used quite extensively within it. Freedombone uses the Mutt and Mailpile email clients and neither of those are very affected. Mutt has S/MIME turned off and Mailpile doesn't display HTML in emails by default. There are a few issues with Mailpile which are described here. The TL;DR is that unless you are reading encrypted mail from 10+ years ago and you're being actively targeted then there isn't likely to be a problem.

In reality efail is a low impact security issue with some email clients or some people running extremely old versions of GPG. These issues had also mostly been known about for a long time.

This wasn't how the problem was publicised though. Instead the advice from EFF was to immediately turn off PGP encryption or uninstall PGP software. Even if you are running an email client which has one of the efail problems the EFF advice was not an appropriate or proportionate response. It suggested to me that the people at EFF were not thinking in terms of threat models. Out there in the wild how likely is the exploit to happen and what are the chances of that weighed against the security features provided by GPG/PGP email encryption? Most users of PGP are not fools, and it has been widely understood for a long time that including HTML within encrypted email is bad opsec which can expose you to a bigger range of threats.

"Recommendations to disable PGP plugins and stop encrypting emails are completely unwarranted and could put lives at risk. The correct response to vulnerable PGP implementations should not be to stop using PGP, but to use secure PGP implementations"

In the years after the Snowden revelations quite a lot of effort went into getting more people - especially those in "at risk" categories - to encrypt their email. To then encourage all that to be thrown away was reckless and I think there is still a debate to be had about what constitutes "responsible disclosure". What information was EFF supplied with and why did they report in the manner that they did? Was it just clickbait one-upmanship, or something else? Nothing on the internet is perfect and security software which has some bugs under some conditions is probably still better than transmitting communications in the clear where it can be trivially read by any intermediary.