The shared items system in Epicyon is a similar idea to something like Freecycle, for bartering or giving stuff away which you no longer need. You can post items and they will be listed and searchable for however many days you specify. Shared items are only accessible to other people on your instance and aren't federated. That was a deliberate design choice, because otherwise I expect that it would be primarily used to generate spam. 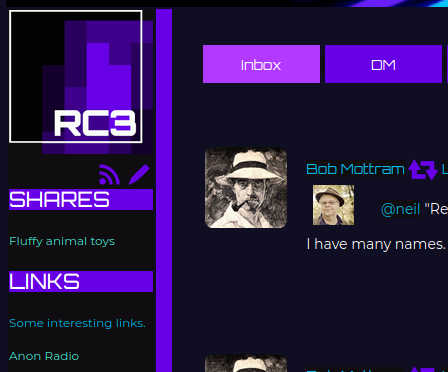 A recent improvement is that when new items are added in order to make this a little more obvious I've modified the left column of the UI so that it shows a few of the most recent shares. Selecting one of them then generates a direct message to the person who is offering the share. The usual direct message rules apply. By default you'll only be receiving DMs from people that you follow, so that's something to keep in mind. The overall scenario is free exchange between people who have already established a trust relationship. There is also deliberately no attempt to algorithmically estimate trust scores or anything like that - the trust needs to be purely established through social interaction.