As a bit of light-hearted fun during the holiday season I've been adding graphics to AberMUSH. AberMUSH is a type of Multi User Dungeon (MUD) game with a Dungeons & Dragons type of fantasy theme. It's based on AberMUD which was originally written in the late 1980s on a mainframe computer at Aberystwyth university.

The codebase is completely rewritten in Python, but it's based on the original AberMUD universe of roughly 1000 "rooms" and developed in approximately 1990-91, then later released under GPL license in 1996. Maybe one of the earliest GPL'd games. 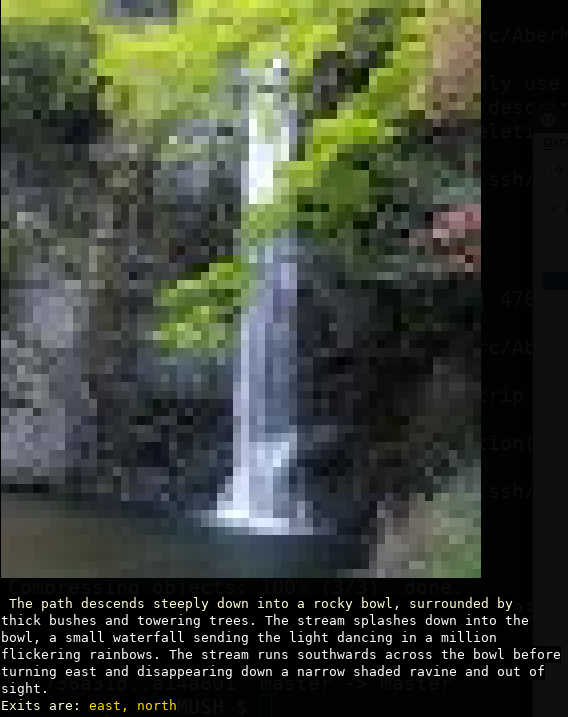 AberMUSH is not so much a game as an exercise in digital archaeology. Trying to reconstruct an approximation of something which existed in decades past, but also with new features added. As a game it's so anachronistic that it seems quite improbable that anyone today would play it. Also because it's a MUSH there is no real objective to the game other than to socialize and perhaps fight in a fantasy environment. There are no quests, no points and no high scores table.

In keeping with the anachronistic theme the graphics are ANSI codes with something like 16bit color depth. This type of primitive graphics would have been possible on the more advanced DEC terminals of the 1980s, although storing hundreds of such images - even with compression - probably wouldn't have been possible with the hard disks of that time. So it's a kind of retro future project based on a past which wasn't quite feasible.

The graphics are sampled from real CC0 licensed photos and converted to a mere 60 columns across, giving a blocky 1980s teletext-like aesthetic which conveys some impression of the scene but allows your imagination to fill in the details. Another aspect of the impossibility of this project is that the public domain or Creative Commons resources which I'm making use of didn't exist in the 1980s (or not to anything like the same scale).